Linkedin
Born in Scotland, in 1965

Renny TAIT treats his subjects as still-lifes, and has absolute mastery over the composition, content and background. His works combine both a smooth, accurate and straight world and a mysterious light that transforms the chosen monument in a depopulated and poetic atmosphere. He began in 1990 a great international artistic career. 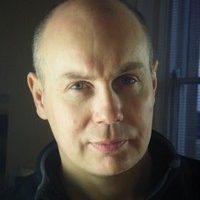 On first inspection, it is tempting to dismiss the architectural paintings of Renny Tait. Rudimentarily constructed, using a palette mainly limited to muted browns and ochres, these stilted and silent canvases fail to elicite any immediate response from the viewer. They have a sort of tweeness which is at once undemanding and vaguely offensive. There is no bias towards beauty. He treats factories and agricultural buildings in exactly the same manner as castles and palaces, all placed within an idealised, uninhabited environment.

But as one reflects upon this feature of his work, it becomes slowly and tentatively clear that through the idealised manner of their execution a puzzling strength begins to emerge. In dealing with the ideal, Tait transcends the actual and creates a beautiful independent object from it. Furthermore, through our experience of the ideal as described by Tait, the viewer is led to a new appreciation of the actual, seeing the inherent beauty of an object hitherto thought of only as ugly or at least not worthy of serious aesthetic contemplation. The purpose it seems is not to dress reality up, to make everything look pretty, but to force us to reconsider how and why we consider some objects to have aesthetic merit and not others.

The smaller pieces work better, their size being more appropriate to the modesty of Tait’s style. One or two have a lyrical simplicity which is genuinely disarming. In addition some of the paintings have a magical, fairy-tale like quality which also repays closer examination.

One quickly realise that the secret to Tait’s art is exactly that which we initially found limiting, ie. his use of colour. The effect of all those ochres is warm glowing pockets of golden brown emanating from the cold white walls of the gallery, creating an eery unreal atmosphere. Or as in a dream, where we gloss over details but remain with a poignant sense of an atmosphere pregnant with the meaning of we know not what.

At first sight, Renny TAIT is an architectural painter. But this appearance is deceptive, like the paintings themselves. The building looks eminently recognisable – like St Paul’s Cathedral, for instance. A second look shows that the artist has taken great liberties with the actual building and its setting. TAIT treats his subjects like still lifes, and exercises absolute control over composition, content and background.

The power stations, factories, domes and towers play the same role as the fruit in Zuburban’s  « Still Life with Basket of Oranges » – the source for a TAIT vision of a cement factory. A pewter dish becomes a water tower : the basket itself is transformed into the central golden cylinders : and a ceramic cup is changed into a rich, butter-coloured tower of pipes. TAIT has also borrowed colour relationships from Giovanni Bellini : lapis blue skies set behind golden domes.

Just as the buildings resemble still lifes, so the new series of pictures of household objects like mugs, kettles and coffee jars are painted to resemble architecture. Like his fascinating use of perspective, TAIT’s representation both deceives and delights the eye. The actual motif is given full treatment, but stands as the basis for bold studies in the interplay of colour, form and light. Each painting forms a precise and mathematical pattern.

The fact that TAIT began as an abstractionist thus makes complete sense. After he left Edimburgh College of Art, the visible world began to intrude upon his hard edged abstracts. A pure white 1930’s residential block behind the V&A, which Tait’s studio overlooked, began to appear in his work as a windowless ghostly presence. It provided the springboard for the brilliant quasi-architectural studies which made his high and still growing reputation.

These beautiful paintings, with their virtuoso technique, bridge the worlds of classicism and abstraction. The later influences – Mondrian, Morandi, Barnett Newman – blend comfortably with the very different worlds of Bellini and Wren to form TAIT’s own mysteriously depopulated universe of colour harmonies and glowing light. They remind the viewer in calm but seductive terms of two important truths : that all art is abstract, and that neither beauty nor painting is dead.